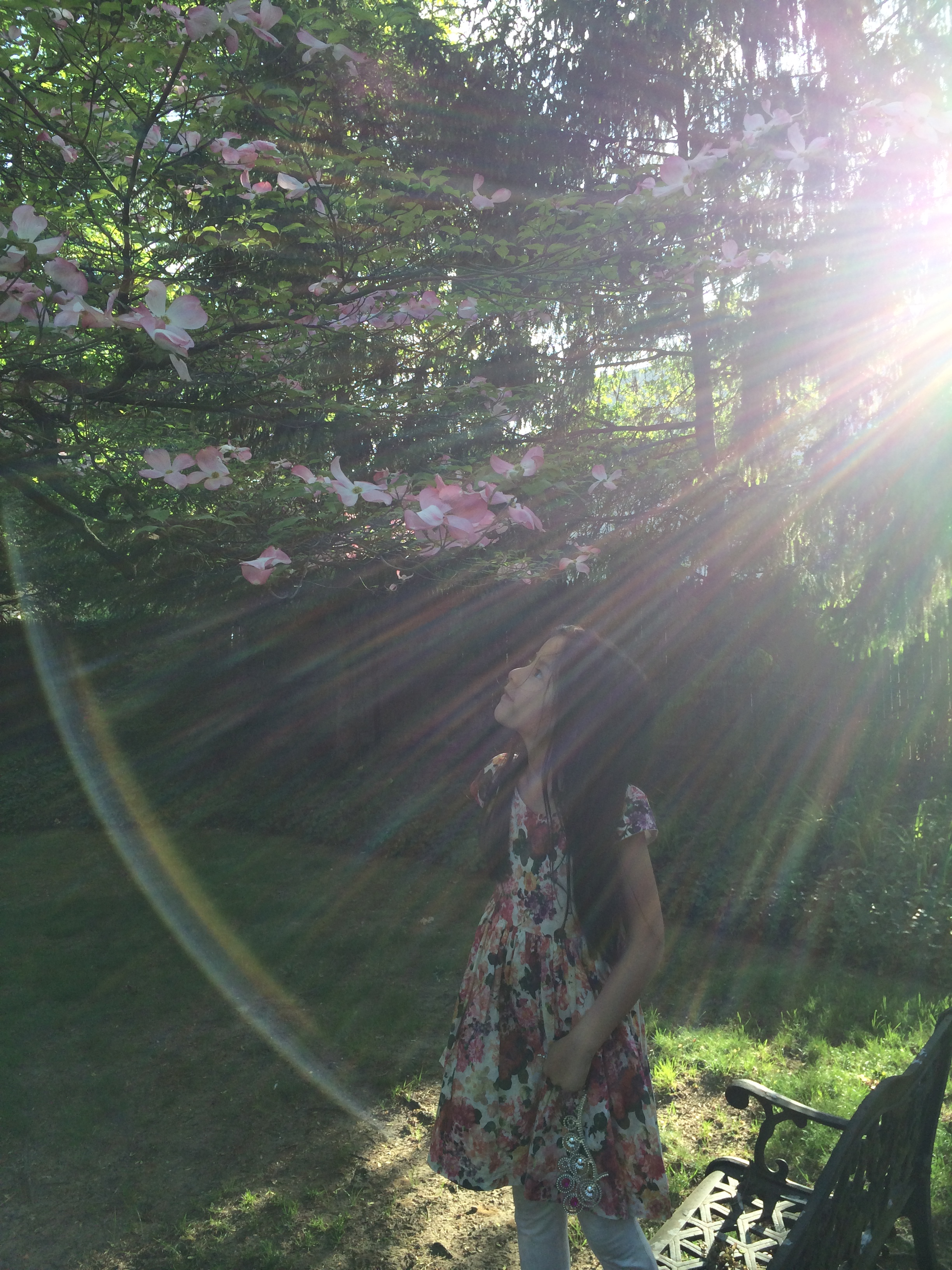 “Hope inspires the good to reveal itself.”  Attributed to Emily Dickinson

This morning I’m sitting at the dining table finishing breakfast when my daughter comes out of the bathroom brushing her teeth and somehow singing at the same time,  Her six-year old mouth is full of toothpaste, but I can still make out the words as she turns to go back into the bathroom: “It is good, it is good, everything God made, from the stars in the skies to the ocean waves…”  It’s a song she just learned at a week-long church program she attends every summer.  It’s a catchy tune, but I might have been surprised I could genuinely sing along with the words a few years ago.  With the five year anniversary of my husband’s death edging towards me in a matter of days, those days of shock and horror have been replaying in my mind.  Like the one where I spoke to his older brother for the first time on the phone, conveying the sorrowful news through sobs.  I don’t remember any of that conversation except for one sentence he spoke to me.  “Whatever happens,” he said, “remember… God is good.”

In truth, it had already happened, the worst thing I had never imagined and those words, replaying in my mind in his exact intonation, were not an affirmation of a faith that I could carry with me for comfort as I embarked upon the darkest night of my soul.  Rather, they became a question mark, an anchor not lowered down, but hoisted up over the boat, heavy chains on splintered deck as I set out to black, stormy waters.  Your world view changes when you experience sudden tragedy with no chance for processing, pleading or prayer.  Even though you know on some level that other people have been experiencing suffering all along while you sang about God’s goodness, everything changes when it happens to you- when it’s not theoretical, not an argument in your college philosophy class, not a handful of Bible verses sent to a friend who is undergoing chemo, along with a heartfelt note that you are praying for her.

While my daughter is singing that same song about everything being good in the car last week, she asks, “What about lice?  Did God make lice?  ’cause they’re not good!”  She and I had the pleasure of dealing with this parasite for the first time a couple of weeks before when it was running rampant in her school, so her question is more than valid.  It’s a question I had asked after experiencing another parasite, bed bugs, back when we lived in Brooklyn almost seven years ago.  Why would God make something that solely feeds on human blood, I remember thinking.  I eye my daughter in the rearview mirror and tell her that I don’t know, but that maybe they weren’t there in the beginning- when everything was still new and perfect.  “Who knows- maybe it’s something we did or do that created or brought them.  God did say everything he created was good, and I don’t think he would’ve said that about those, do you?”  She is satisfied with that.

In the years after losing my husband, nature became more than rainbows and sunsets- and nature alone no longer communicated the benevolence of a creator.  It never did really.  Glory and grandeur, yes.  Goodness and love- just a guess.  It included bed bugs and lice, and the grit of survival of the fittest that you see in nature documentaries.  It included tornados and earthquakes, and waters so picturesque, so beautiful, and yet so deadly to the one I loved.  And just as I could no longer pick and choose the aspects of nature I would focus on, I could no longer selectively pick out the Bible verses that suited me, often out of context- just because they provided comfort.  Even though my once pristine faith looked riddled with holes, it wasn’t loss that put them there.  Loss had just shined a spotlight on them.  Not every hole mends; not every scar heals.  Jesus Himself still kept his scars, my pastor pointed out to me a few days after the funeral.  “But they came to mean something very different after the Resurrection,” he said.  Holes or not, I’ve had to hoist up my tattered sailcloth and see if I could catch the wind just the same.

It’s interesting to me now that what I have taught my daughter in the past few years is a purer reflection of my own belief than anything I might have written, said, or even consciously thought.  Despite all of the searching I was doing on my own, I never doubted what she should learn and know.  It is one thing to give God the cold shoulder, but to withhold truth from your child, is to punish someone who has nothing to do with your struggle.  So, I confess, I have taught her that God is good- that He made all things good, even as my mind tried to comprehend how He could have watched me moments before I received that phone call, or how He can listen to her now as she tells me how hard it is when all of the other kids in her class talk about the gifts they’re getting their fathers for Father’s Day.  There was less dogma and a lot more honest “I don’t knows” thrown in there. A little more hope, and a little less faith.  Does it all make sense?  No, but a little bit more than it might without it.  Augustine said something like to search for God is to have found God.  Don’t disparage the search.  The search is a good thing.

One night a few years ago, I attended a widow group in Manhattan.  It was the only time I ended up going, though I still have an email relationship with a few of the younger women with children that I met through it.  That night, there was an older woman who lived near me and had driven in.  She offered to give me a ride back home and I accepted.  On the ride home we talked a lot about books, how reading had comforted us more than pretty much any other thing.  She read fiction; I read nonfiction.  She told me she and her late husband were both atheists, so she didn’t really believe there was anything more to life than…this.  She pointed out the wretched state of the world as one of the reasons she couldn’t believe in a benevolent Creator.  I told her I was struggling, but I felt things would be a lot worse, we should have blown up the whole planet a long time ago, if not for some arm of mercy held over us.  She proceeded to list all the crummy, really terrifying things in the world she could think of, “Really?  It can’t get much worse than that,” she said.  Her words, like the words of my brother-in-law, “Whatever happens, remember…God is good,” would replay in my mind the next couple of years as I struggled to navigate life with an uncertain worldview, with core beliefs that had lost their core, subject to anxiety and panic attacks.

But then little things happened.  Near misses.  I’d be backing out of my driveway to take my daughter to preschool and almost, very nearly, hit someone pushing a stroller.  I’d stop and imagine how my entire life could have changed in that moment.  But instead, my day goes on as usual.  Off to Pre-K.  A coffee from Starbucks.  Stories at bedtime.  Another morning, I am about to leave to take her to school and head out for the day when I hear a little crackle as I move across the kitchen and realize I’ve left the flame on low for probably an hour after taking the oatmeal in the pot off.  I turn it off, and I am thankful for mercy and alternate endings.

I can’t help thinking- what if something had happened slightly different on that day in July almost five years ago- and my husband came home and we were living together now- having absolutely no idea that this alternate ending I’m living had come so very close.  He was healthy, his death totally preventable.  That idea haunts me a little because I feel the alternate endings are all around me, the ones that haven’t happened.  Some would call the tragedies that do happen statistics, or an anomaly- but what of the ones that don’t happen? I believe goodness and mercy have something to do with that.  I respectfully disagree with that widow that drove me home a couple of years ago- yes, it really could be a lot worse.

In the end, it all comes down to trust.  The way you look at the world- as an essentially evil, terrifying, or chaotic place, or a place of beauty and design and love, will in large part determine the way you live your life.  Can you trust in the face of darkness and “lean not on your own understanding?”  That somehow this all comes out right when it seems so horribly wrong?   My English teacher from the 8th grade that I keep in touch with shares with me recently that the chaplain in the community where she lives recently wrote a blurb about a book that suggests in addition to psychological and physical remedies for anxiety, a radical trust in God is an integral spiritual therapy.  Tim Keller, pastor of a large church in NYC called Redeemer and author of many apologetic books told me once in a conversation that if I believed God was powerful enough to have intervened and prevented my husband’s death, then I also had to believe he had reasons for not doing so that I could not understand.  This is an intellectual argument for trust, but the heart is a different organ.  In the end, it makes a choice on its own, more instinctual, more from the gut, than rational.

During that same church program last week, I attended a parenting seminar one day.  The speaker was going over the stages of development.  From ages 2-3 the struggle is between autonomy and shame- and if a child learns autonomy- the resolution is will.  The important event is toilet training.  A 4-5 year old encounters initiative versus guilt.  If they learn initiative, the resolution will be virtue and purpose.  The main event is exploration.  Ages 6-11 introduce industry versus inferiority; the resolution is competence and the main event is school.  You get the idea.  Well, the very first thing a baby learns from birth to about eighteen months is this: trust versus mistrust.  The main event is feeding.  Can I trust that I will be cared for?  That this world is a good and safe place where I can be nourished and loved?  This is the very first thing we look to learn as tiny infants, and it is the very same thing we must revisit again and again at our core.  Having not been familiar with this developmental terminology- I was pleasantly surprised by the resolution to this one.  If an infant learns trust- the resolution is this:

Hope is with you when you believe
The earth is not a dream but living flesh,
that sight, touch, and hearing do not lie,
That all thing you have ever seen here
Are like a garden looked at from a gate.

You cannot enter. But you’re sure it’s there.
Could we but look more clearly and wisely
We might discover somewhere in the garden
A strange new flower and an unnamed star.

Some people say that we should not trust our eyes,
That there is nothing, just a seeming,
There are the ones who have no hope.
They think the moment we turn away,
The world, behind our backs, ceases to exist,
As if snatched up by the hand of thieves.

9 thoughts on “Whatever Happens”